For the love of Coffee and Netflix

I have no idea how many days I am behind on my photo challenge.  For what it’s worth, I apologize. I was on Day 12- Photo of something you love. A picture of my kids would be to obvious so I found this one. It about sums up my whole life right now.

Wall-E-Mart. I can’t stand that place but I feel like I live there. I am at that stupid store at least twice a week, trudging through the isles and fighting off the waves of shoppers pushing past me in there little hover rounds. Of course, since she’s been there so much, K thinks that this is the best store ever created.

Day #8- A picture that makes you laugh

Day #7- A picture of your most treasured possession- 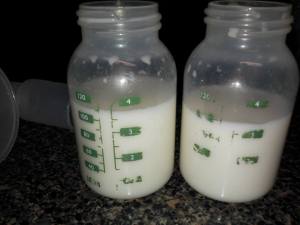 Yep, that’s Breast Milk. Mothers best.
Why is it my most treasured posession? Because I have worked damn hard to be able to provide enough of it for my baby.  I had trouble breastfeeding K so being able to do it with Sy is so amazing for me.

How many is to many? (A talking it out to myself post)

Day #6 asks for a photo of something I want to do again. The answer, easily, is have more babies! The question really is- How many are to many?

This question popped up on the Facebook page of a friend tonight. It then followed as a topic on TheLeakyBoob.com and Howtobeaman. Seeing it more than twice made me think that the universe was telling me to get my own thoughts out.
Since I had my son I have really been feeling the pull to have more children. It may be the hormones, it may be mental illness or it may be as The Hub says and my natural Virgo-ness is taking over. Whatever the reason, I can’t wait to crank out at least 4 more of these snuggly, snotty, poop factories that absolutely steal my heart.
I’ve really been thinking hard about this for the last few days. Syfy is almost 5 weeks old, which means I will be heading back to the doctor shortly for my 6 week check up. I know she is going to ask the big question about birth control.
Honestly, when I was trying to get preg last year I got really comfortable with the Natural family planning method so I would like to go that route and whatever happens happens. I would really like to be pregnant again within the year.
They say (and by they I mean my OB and our Pediatrician) that the best time for me to have my kids is between the age of 25 and 35. Well, I am 29 now so if I get pregnant every year I can have 6 more within the window. Not that I want to get pregnant every year. I am thinking that it will probably take 6-7 months between kids for my body to get back and for us to get preg again so I am thinking that 4 more may be possible. I am almost positive that 5 to 6 is my max.

Don’t worry kids, Mommy has not left you again. Real life has been demanding, little man is having a growth spurt so he’s been cranky as shit.

Anywhoo- to catch up on the photo challenge I am combining # 4-5.

#5- A picture of your favorite memory

Oh God, I can’t pick one. I really can’t. Once you have kids there are so many absolutely amazing things that happen in your life and most of the time, you are to busy laughing to grab the camera. There are TONS of  great pics on my FB page.. from the moment that Hub proposed to me, Kayla’s birth, our wedding, thousands of pictures of Kayla growing up, Sy’s birth and so many more. I just can’t pick one.

Day 3- Post a photo of the cast of your favorite show.

You mean, I have to pick just one? I can’t narrow  it down to just one! Lets see, there’s Paranormal Witness, Dexter,  Downtown Abbey, Sleepy Hollow, Call the Midwife, Breaking Bad, Face Off, Project Runway, Scandal, House of Cards, Orange is the New Black, Lost Girl, The Following… to get started. I will admit, I don’t have cable so I am stuck watching shows that are a season behind on Netflix or a day late on Hulu.

#1 with  a bullet is most definitely Supernatural.
I mean, come on.. just look at that… The show is fantastic. I am obviously into the darker, more suspencefull shows and Supernatural fits that to a T. Great writing, witty dialogue and 8 Seasons of Jensen and Jarod gorgeousness to watch back to back on Netflix. Mischa isn’t to bad either.
I got no shame in my game y’all. I’m a Dean fan through and through.

#2- American Horror Story
IMHO Season One was the best so far. I watched it twice. Still love it.
I love that they bring back the same actors in different roles each Season. I am also a HUGE fan of ANYTHING Jessica Lange does. 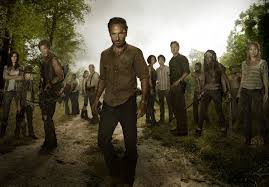 #3- Walking Dead
It’s Walking Dead. Who doesn’t love Walking Dead?
Sure, the show could have been renamed People who lose their kids and sometimes Zombies show up and there are plot holes left and right but it’s entertaining.

If sarcasm and self deprecating humour were an Olympic event I'd definitely qualify.

Parenting to the beat of my own drum

Because it's always coming free, buddy.

Beatitudes of my life

Being grateful for everything in my life.... no matter what...

Figuring out the world and my career.